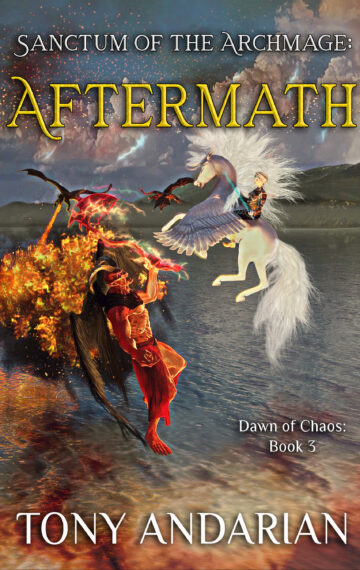 Sanctum of the Archmage – Volume One, Book Three

Hell Gate continues in Aftermath, the final book in Sanctum of the Archmage: Dawn of Chaos.

“Teach me, Grandfather. To fight, with steel and magic. Help me to become the weapon I will need to be to defeat our enemies.”

The Eastern Continent reels in the aftermath of the demon invasion. Zomoran’s armies sweep over the land. Orion and Diana struggle to find a way to fulfill their oath under the new order as a determined resistance forms in the capital city. Great and small, the valiant of Carlissa commit themselves to a holy war against the Horde.

And no one believes that the princess and her grandfather, the Archmage, could possibly have survived the Massacre of Lannamon. But could they?

Aftermath will be continued in Wrath of the Peregrine King, the first book in Sanctum of the Archmage, Volume Two: Crucible of Heroes.