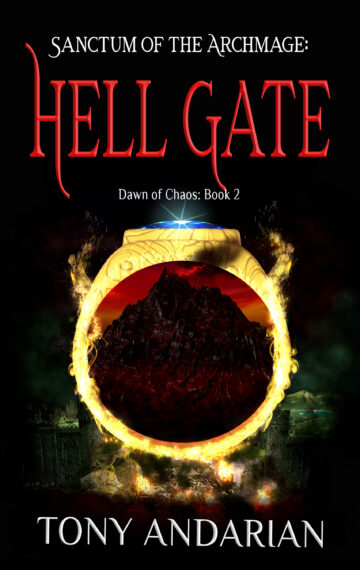 A new constitution prepares Carlissa for an era of enlightenment. The old order fades, and a promise of freedom stirs the air.
In the space of one terrifying day, that promise is shattered in a bloodbath of fire and magic.

An ancient enemy returns with the opening of the Hell Gate. Chaos reigns as the people rally to fight a desperate battle for survival, and many wonder bitterly why the gods seem to have abandoned them. Their only hope lies with the magic of the Archmage — and his, with a free-spirited princess who never wanted to rule. She must find the strength to set aside her bard’s calling and take up a battle against impossible odds, or surrender her land and people to the Black Magus and his demons.

Dawn of Chaos: Hell Gate continues to bring the award-winning Sanctum of the Archmage role-playing games to the world of fantasy fiction. Get it now and don’t miss this exciting first novel in the saga!

Dawn of Chaos: Hell Gate — Sanctum of the Archmage, Volume One, Book Two

Prologue to Chaos continues in Hell Gate, the second book in Sanctum of the Archmage: Dawn of Chaos.

Hell Gate is currently available both as an individual e-book, and as a series of four novella length e-book “episodes.” To purchase Hell Gate as a four-part e-book box set from Andarian Publishing at a discounted price, click here.

Hell Gate is continued in Aftermath, the third book in Sanctum of the Archmage: Dawn of Chaos.

Note to Readers. Hell Gate was originally released in 2017 by Andarian Publishing as part of, and under the title, Dawn of Chaos. Dawn of Chaos is now being re-released as a trilogy under the same name. Hell Gate is the second book in that trilogy.

Hell Gate was also re-released in 2021 by Andarian Publishing as a four novella serial under the following titles. This book combines that serial into a single novel.