Prologue to Chaos, the first book in the Sanctum of the Archmage Saga, is now available from all major e-books stores! In this scene, we meet the villain of the series: Emil Zomoran, Lord of Westreach — soon to be known as “The Black Magus.”

Gerard shook his head. “It doesn’t have to end like this, Professor.”

“Yes, it does,” Zomoran said. “Because I’m done with you. Done with years of trying to bring wisdom and progress to this intellectually barren kingdom. Done with appealing to fools, aided only by a handful of friends who understood — who saw the kind of brilliant society we could engineer, if only we could order things as they need to be. Done with writing and speaking to classes of empty minds, who lack the inspiration and courage to see and dare the truth.”

His gaze came to rest on Aron, and a strange anger blazed in his eyes.

“Done with puppets of the ruling class, too busy tiptoeing around zealots, and dancing on the strings pulled by an old man behind the scenes. The only other great mind in this entire besotted nation, but without the ambition to guide it into the embrace of history.

“Oddly enough, I may owe Salmanor Hardin a debt for opening my eyes today. I see now that this society is decadent beyond redemption. It is time for it to be purged in fire and rebuilt from the ashes.”

Aron’s eyes hardened as he returned the magus’s acid glare.

“The people of Carlissa are not toys or machines, Zomoran,” he said, “to be ‘engineered’ to suit your view of the way things should be. They are individuals, with rights and dignity. Too often in the past have we made that mistake. It’s time to try a better way.”

“So parrots the puppet,” he mocked. “Your grandfather’s ideals are a delusion, boy. A nation of sheep cannot govern itself. It needs to be led, by those with the knowledge and spirit to understand what is best for them. Or do I truly have to lecture a princeling of the realm on the meaning of noblesse oblige?”

His free arm reached behind him. He drew the woman with the bloody hand into a protective embrace.

“Would a great man allow his best minds to be given over to torture and the threat of a heretic’s fire?” he demanded. “For the mere crime of thinking bold thoughts? Or would he lead and protect them? And if others lacked the wisdom to follow of their own accord, would he not shepherd them? By force, if necessary? For their own good?”

“A great man doesn’t concern himself with his own greatness,” Aron replied firmly. “Empty minds, you say? I was more attentive to your lessons, Professor, and to your example, than you realize. You stand there, sheltering a colleague whose devotion feeds your vanity, and you leave a trail of dead and broken bodies in your wake to do it. And you presume to lecture me about the meaning of noblesse oblige? Whose needs do you truly serve, Lord of Westreach?”

Zomoran regarded him icily, but with a look of sudden wariness.

“You are clever, princeling,” he said. “More so than I gave you credit for. You’re stalling, trying to keep me talking and arguing, while you wait for reinforcements from the palace. Yes, I know that the Archmage is there. And as much as I would relish the opportunity to test myself against him, that is not my plan for today.”

Read the first chapter, Rogue Wizard, at the saga’s World Anvil site, The World of Kalara. Or download Prologue to Chaos, a free novella introducing the Dawn of Chaos Trilogy. Or get Dawn of Chaos, the first of ten planned volumes in the Sanctum of the Archmage Saga. All available now from Andarian Publishing, and from all major e-book stores!

Rogue Wizard – The World of Kalara on World Anvil

Buy The Dawn of Chaos Trlogy

The Return of the Horde, the first of four parts or “episodes” in the release of my novel, Hell Gate, is now available for purchase from from all major e-book stores!

The four parts will be published at three week intervals through the end of May. In the fall I’ll collect them into a single volume that will be available in e-book, print and audio form.

Get it on Amazon Kindle

Buy from Barnes and Noble (“Nook”)

Get it from International Bookstores

Here’s an excerpt from the book’s opening scene. It would have made for a great cover illustration, but I think that a simple cover and background will do for now.

Its appearance sharpened into focus as it stepped through the edge of the dome and into the city. It stood about twelve feet in height. It was man-shaped, walking upright on two legs, and wore what looked like a harness of red, leathered straps. A heavily muscled body of jet black skin gleamed as though wet in the bright morning sun.

Gigantic wings covered with black feathers shrouded it like a cloak. They came unfurled as it walked, reaching out to either side, and beat the air menacingly. As they did, they revealed two arms carrying an enormous axe with a viciously serrated edge. The axe shone with an evil red light.

The creature strode boldly across the amphitheater. It stopped halfway between the edge of the dome and the marketplace. It turned, surveying the city and its people. Then it unfurled its wings to their full extent, threw back its head, and laughed.

“I am Incanus Thad,” the demon’s voice boomed. “Captain of the Horde of Zomoran, the Black Magus. Behold me, mortals, and despair — and die!”

Prologue to Chaos and The Return of the Horde, the first two books in the Sanctum of the Archmage Saga, are now available from all major e-book retailers!

The Return of the Horde is the sequel to Prologue to Chaos, which introduces the exciting new epic fantasy series. It is also the first of four novella-length “episodes” in the novel Hell Gate, which will be released at three week intervals between now and the end of May. Hell Gate will be followed in June by the novella Aftermath.

These six books are already available directly from Andarian Publishing, on this website. The upcoming four books are also available for pre-order now on Amazon Kindle, Apple Books, Barnes and Noble (“Nook”), and Rakuten Kobo, as well as several international bookstores. You can find them at the links below:

Together, these six books comprise Dawn of Chaos, the first of ten epic-length volumes planned for the Sanctum saga. The next book in the series, The Ring of the Killravens, will be released on April 14, 2022.

The single most helpful thing that an appreciative reader can do for an author is to write a review of their book.

Re­views are incredibly im­por­tant to help in­die au­thors be­come known and rec­og­nized for our work. With­out them, we are es­sen­tially in­vis­i­ble to the com­mu­nity of read­ers who might oth­er­wise find and en­joy our books. They are also one of the best ways for us to get the feed­back we need to grow and im­prove as writ­ers. Just a line or two of hon­est feed­back can make a huge dif­fer­ence, so I hope you’ll be will­ing to help.

The Goodreads and various e-store pages for a book are the best places to leave a review. And the easiest way to find store pages for the Sanctum of the Archmage books is from the handy Universal Book Links (UBLs) that Draft2Digital makes available. Here’s where you can find mine:

In addition to their wide bookstore release, all six episodes in Dawn of Chaos are now available for purchase directly from Andarian Publishing, on this website. They can be found by clicking the book images below:

Editions available direct from Andarian Publishing are distributed through the BookFunnel book delivery service. Unlike the bookstore editions, they are available in all common e-book formats (Kindle, epub, and pdf), and without DRM.

Dawn of Chaos will be released on multiple bookstore platforms at intervals from March through June 2022.

I’m pleased to announce that I’ve now finalized a wide release schedule for the six novella-length “episodes” in Dawn of Chaos, the first volume in the Sanctum of the Archmage Saga. 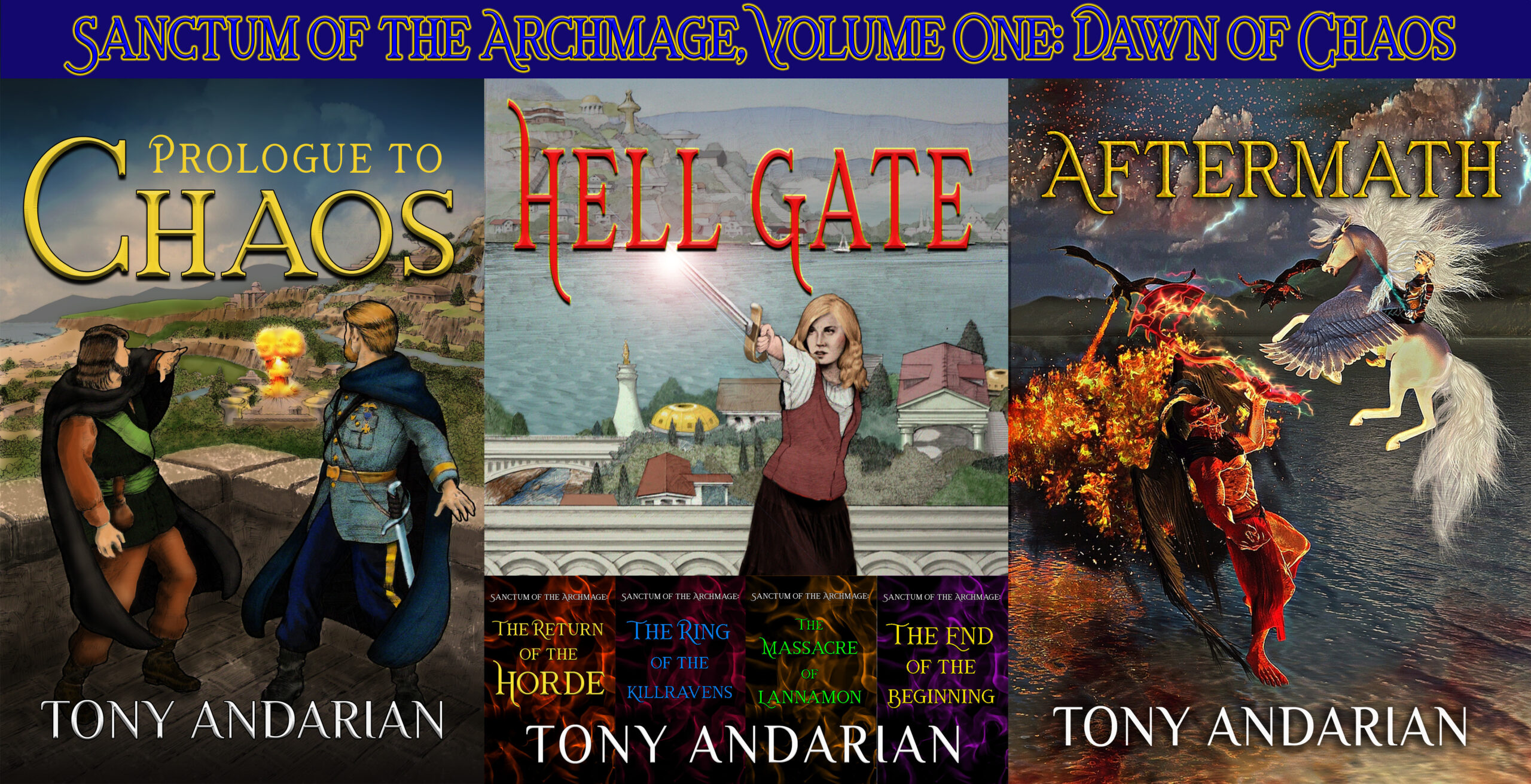 Pre-orders have been set up for each book on all of the major e-book sellers, including Amazon Kindle, Apple Books, Barnes and Noble, and Rakuten Kobo. Beginning this week, on March 3rd, these pre-orders will begin going on sale on the schedule listed below:

Draft2Digital links point to Universal Book Link (UBL) pages for each book, which will include sites on which they will be available in addition to the major booksellers. Currently that will include Scribd, as well as several library systems. With the upcoming acquisition of Smashwords by Draft2Digital, this list is expected to increase in the near future.

In addition to the above, all six episodes in Dawn of Chaos are now (and will remain) available for purchase directly from Andarian Publishing, on this website. They can be found here:

Editions of the books available from Andarian Publishing are distributed through BookFunnel and are available without DRM.

Now that the release schedule for the books is set, my next step will be to plan several marketing and promotional campaigns for the series, and to send out a (long overdue) newsletter update. So stay tuned for more news to come!